The second in the series, HOLLYWOOD ENDING, was selected as one of Suspense Magazine’s “Best of 2018” books in the Cozy Mystery category, one of CrimeReads “20 Best Crime Novels of 2018,” one of Book Riot’s “Rioters’ Favorite Mysteries, Thrillers, And True Crime of 2018,” and was one of the TODAY show’s “Best Summer Reads” for 2019. It was also nominated for a Lefty Award for Best Humorous Novel and an Anthony Award for Best Paperback Original!

I’m also thrilled to share that the series will be coming to audio in spring 2020 thanks to Dreamscape Media. I’ll share more details as soon as I can. 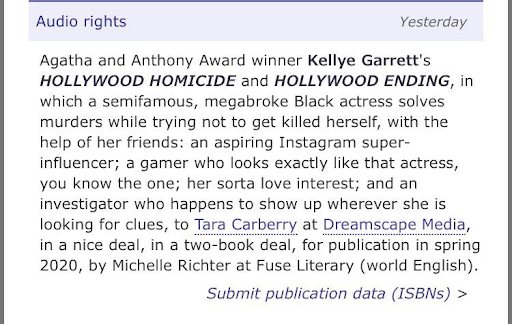 My time in LA included a stint writing for the CBS drama Cold Case. People were always surprised to learn what I did for a living. Probably because I seemed way too happy to be brainstorming ways to murder people every week. But to me, Hollywood is a place where it’s better to laugh than to cry. And so I wanted to write a series that combined my love of mystery with the absurdity that can be show business.

You can find out more about the Detective by Day series (and me) by visiting the links in the above menu.

Yasss. Dayna and Hollywood Homicide made this list from Bustle. 😀😀😀
I made @cata_stan customize a filter for me. I think she did a pretty good job. 😜😝😛
Looks like we officially have release dates for my multiple award winning #ownvoices #blackgirlmagic Detective By Day mysteries about retired actress turned P.I. Dayna Anderson. They're up for pre-order and everything!! #HollywoodHomicide: 2/18/20 #HollywoodEnding: 3/17/20 #booksofinstagram #authorsofinstagram #crimefiction
I got my 5 year old niece hooked on @DrPimplePopper and now she is “pimpling liepomas.” I told my sister she can thank me when my niece becomes a dermatologist! #drpimplepopper
My best nine. 😍😍😍
I rarely straighten my hair but I had to give myself a trim. It won’t look like this tomorrow so enjoy it now, Instagram. 😂😂😂