When it comes to real estate—and, in this case, books—location is everything. As the name suggests, Hollywood Homicide takes place in, well, Hollywood. Dayna and her cohorts travel all over Los Angeles in the name of detective work. I figured it’d be fun to share a few of my favorite real life locations.

Platinum is an auto customization shop smack dab in the middle of the shoe stores, fashion boutiques and restaurants on L.A.’s famed Melrose Avenue. I’ve never personally been to Platinum—it may not be the place to auto detail a Suzuki Grand Vitara—but Day heads there when she’s trying to locate the car that hit our victim, Haley Joseph.

The ArcLight is like the Bentley of movie theatres. It’s also the home of many a movie premiere. I haven’t actually been to a premiere there, but—like Day when she’s on the search for a key witness—I’ve happened to be there when a premiere was happening. The ArcLight doesn’t close for premieres. So it can be prime Celeb Spotting time if you want to catch a movie and a glance at Channing Tatum or Queen Latifah. I’ve spotted both there!

I’m happy to say that I have never been to L.A.’s jail, which is located downtown. Day heads there when she learns her top suspect has been arrested for another crime. She’s super excited for her first jail experience and is a bit sad when it doesn’t live up to the hype.

Every book has a climax and mine suitably takes place on a studio lot. It is a book about the entertainment industry after all. I’ve worked on the Warner Bros. lot twice. Once when I was interning for George Clooney’s production company and later when I wrote for Cold Case. Studios are amazing because from the outside they can look like a collection of just really big warehouses. But you step inside a studio building and you can be transported into a completely different world—literally. They house the sets for your favorite movies and TV shows. They were shooting the last Indiana Jones movie while I worked there and so we used to always walk by this set. It was just as impressive in real life.

What about you? Have you been to any of these places? What’s your favorite place to visit in L.A.? Maybe you’ll find it in Book #2 of the Detective By Day series.

Dayna Anderson doesn’t set out to solve a murder. All the semi-famous, mega-broke black actress wants is to help her parents keep their house. After witnessing a deadly hit-and-run, she figures pursuing the fifteen-grand reward isn’t the craziest thing a Hollywood actress has done for some cash.

But what starts as simply trying to remember a speeding car soon blossoms into a full-on investigation. As Dayna digs deeper into the victim’s life, she wants more than just reward money. She’s determined to find the poor woman’s killer too. When she connects the accident to a notorious Hollywood crime spree, Dayna chases down leads at paparazzi hot spots, celeb homes and movie premieres. She loves every second—until someone tries to kill her.

And there are no second takes in real life. 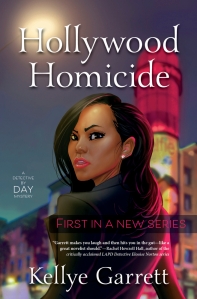